Now that the idea of devices connected in a cloud is more and more familiar, and now that accessing one’s information is increasingly detached from location or access to a specific device, a further evolution seems to be that of connecting not only single devices but even one’s own home, intended as a network of ‘things’ working together to satisfy big and small needs.

I’m obviously talking of the ‘Internet of things’, the next frontier in the evolution of the idea of cloud connection. If you can de-localise access why not access and control your most personal and intimate place from anywhere?

In the 40’s, 50s’ and 60’s, on the then booming media – the TV – it wasn’t a rare sight that of sci-fi informed hypothesis on the technological house of the future. At the time, the way of looking at the problem was that of android butlers who took care of the basic needs of a household (from vacuuming to answering the door). It was the technological translation of the servants that the impoverished middle-class could not afford anymore. 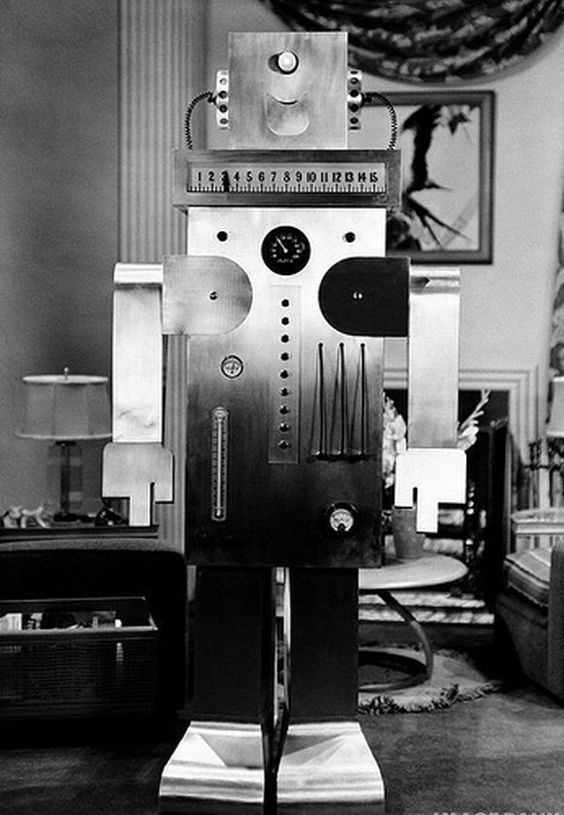 “Roll-Oh”, the robot butler from the 40’s. Have a look at this great promo.

Nowdays the perspective has changed in a subtle, though radical, way. Mostly, we do not imagine our ‘smart home’ as inhabited by a humanoid presence (although this narrative still exist and we see frequent experiments on more or less specialised robots), but more as characterised by an embedded technological intelligence which lives hidden in the plugs, in the microwave, in the thermostat and even in the bulbs. This is the prevailing profile of our domestic ‘Internet of things’.

Possibly the two narratives will, in the end, coalesce; but for the moment one is tangible (and affordable) and the other one much much less.

No surprise that in my technological wandering I decided to accept the challenge and give a go at the ‘Internet of things’ in the second form.

I did not want to buy ‘off-the-shelf’ solutions (where is the fun of being able to code if you keep buying stuff someone else has designed?), also because I consider those solutions unreasonably priced and often mutually exclusive.

The first experiment was small, minimal and – as it should generally be – arose from a practical need.
Here is my first step in home automation!

Back to: My Internet of Things  || Go to: A first project of home automation